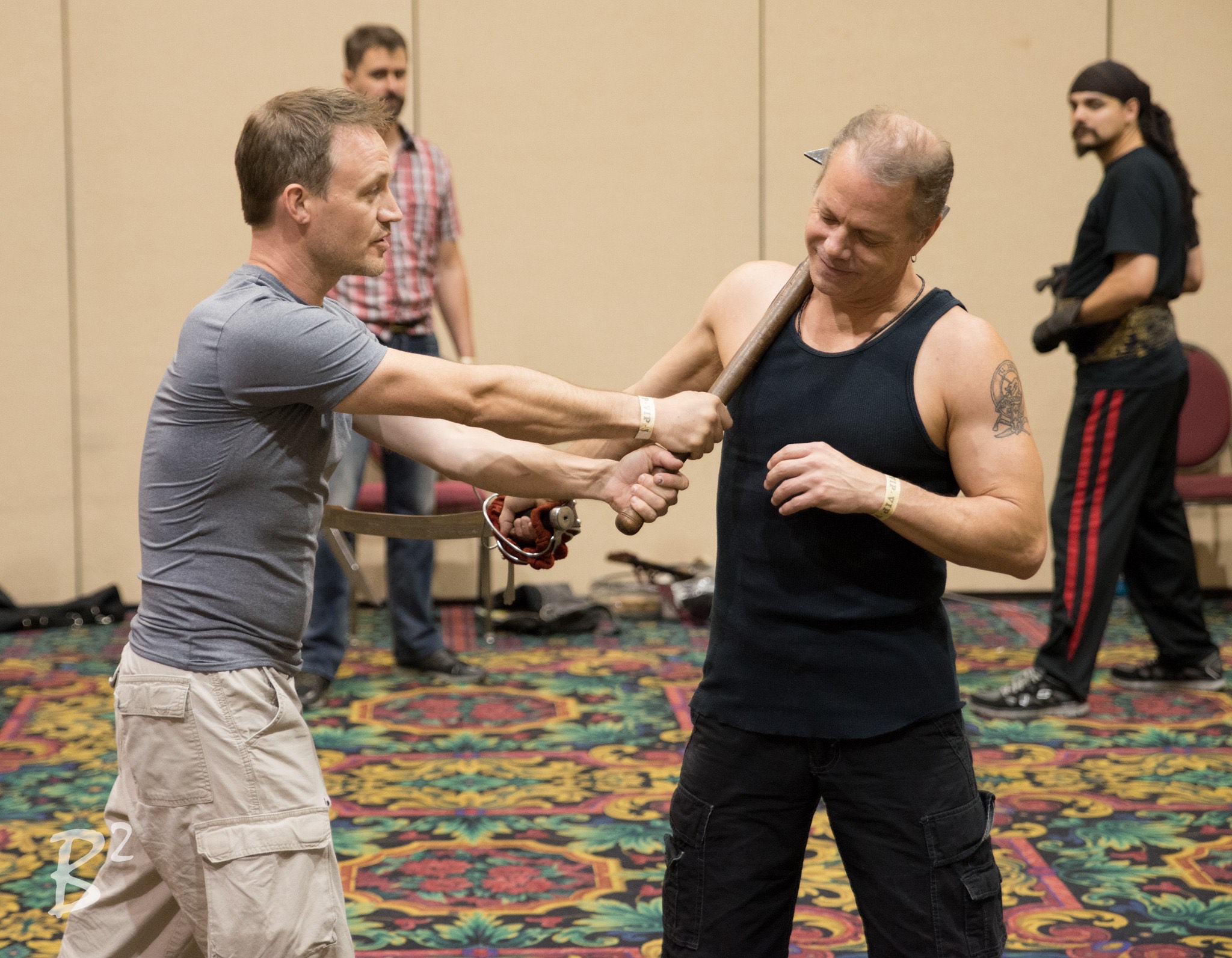 This 6 hour master class/examination will review the Basic and Intermediate level skills of the McLemore Fighting System that is the basis of the School of Two Swords curriculum. It is designed to prepare the student to take the certification exam at the Basic Level in the School of Two Swords systems of Tomahawk & Knife, Bowie & Large Knife, and Tactical/Modern Knife.

Note: this will earn the students an invitation to join the master class at CombatCon to take the intermediate certification course/test.

Sparring and contact drills will be a requirement and a large portion of this examination.

Equipment Required: fencing masks & gloves (If you need to purchase your own mask, here’s an affordable option)

Training weapons will be provided, but if you’d like to buy your own please purchase these:
Small knife trainer
Bowie Knife Trainer
Tomahawk trainer

A Bit About Our Guest Instructors:
Steve Huff
School of Two Swords – Los Angeles Founder and Head Instructor Steven Huff has had a fascination with weapons and martial arts since childhood and has been practicing various forms and styles for over 30 years. As a kid he had a love of fantasy and sci fi (D & D and Star Wars in particular) and the many weapons within those worlds that fueled his desire to learn how to swordfight, and started him on the martial path. He also developed longtime interest in history (particularly martial culture) and has combined both passions in the researching and revitalizing of lesser known martial and combative systems, focusing primarily on fighting systems of Western cultures such as German and Italian medieval and Renaissance fighting systems, early Native American fighting arts, and early gladiatorial and Viking fighting arts among others. His martial journey eventually led him to train and mentor under renowned martial artist and martial historian Colonel Dwight McLemore, founder of the School of Two Swords and the McLemore Fighting System. After years of study Steve was awarded a Full Instructor Certification and school charter, allowing him to teach the full McLemore System.
Having relocated to Los Angeles, Steve currently teaches small groups and private sessions on a variety of topics of both Eastern and Western martial arts and works as a Fight Choreographer/Performer in the entertainment industry through his company Creative Combat.
John Lennox
Dr. John Lennox has trained in various forms of combat for over 34 years. He is an instructor with the Historical Martial Study Society, as well as an expert level knife instructor for the School of Two Swords. Over the past few years he has focused on combat theory as well as fighting with knife and tomahawk. His recent research includes German smallsword and Aztec, Mayan and Inca combat systems. Since 2006 he has been teaching at workshops all over the world, including the Paddy Crean International Art of the Sword Workshop, The Shenandoah Project, the Symposium on the Western Arts of Swordsmanship through History (S.W.A.S.H.) in Leeds, England, and numerous workshops throughout the U.S. as well as Scotland, England, Finland, Ireland, Belgium, Germany, Australia, Mexico and Canada. He is a Fight Director for Art of Combat, an Honorary Fight Director with the Australian Stage Combat Association, and he has taught stage combat courses at Indiana University/Purdue- Ft. Wayne, Lansing Community College, Huntington University, Jackson Community College, Centenary College and Wayne State University.